Newsroom » HIAS Blog » The U.S. Can — And Should — Take In More Refugees

The U.S. Can — And Should — Take In More Refugees

The U.S. Refugee Admissions Program is a vital, life-saving program that protects refugees by helping them find safety in the United States. With more than 29.6 million refugees worldwide, a strong U.S. refugee resettlement program is necessary.

But sadly, despite the largest global displacement crisis in recorded history, the administration has drastically lowered the number of refugees admitted to the U.S. over the past few years. In 2020 the admissions cap, officially known as the Presidential Determination, or PD, was set at 18,000, the lowest since the U.S. refugee resettlement program was created. A temporary halt to the resettlement program because of travel restrictions under COVID-19 makes it unlikely that even 10,000 refugees will be resettled in our country this year.

“The U.S. should be setting an example to the world and showing everyone just how important it is to bring refugees to safety,” said Mark Hetfield, the president and CEO of HIAS. “We urge the administration to set a refugee ceiling high enough to inspire other countries to join in welcoming refugees.”

From 1980 through 2017, the average annual PD was 95,000, but since 2018 the numbers have been slashed each year and the effects are far-reaching. It is possible that the administration could set the cap at yet another historic low or not even go through the PD process. Not setting a Presidential Determination for 2021 would be a shameful abdication of our nation’s historic leadership in this area. 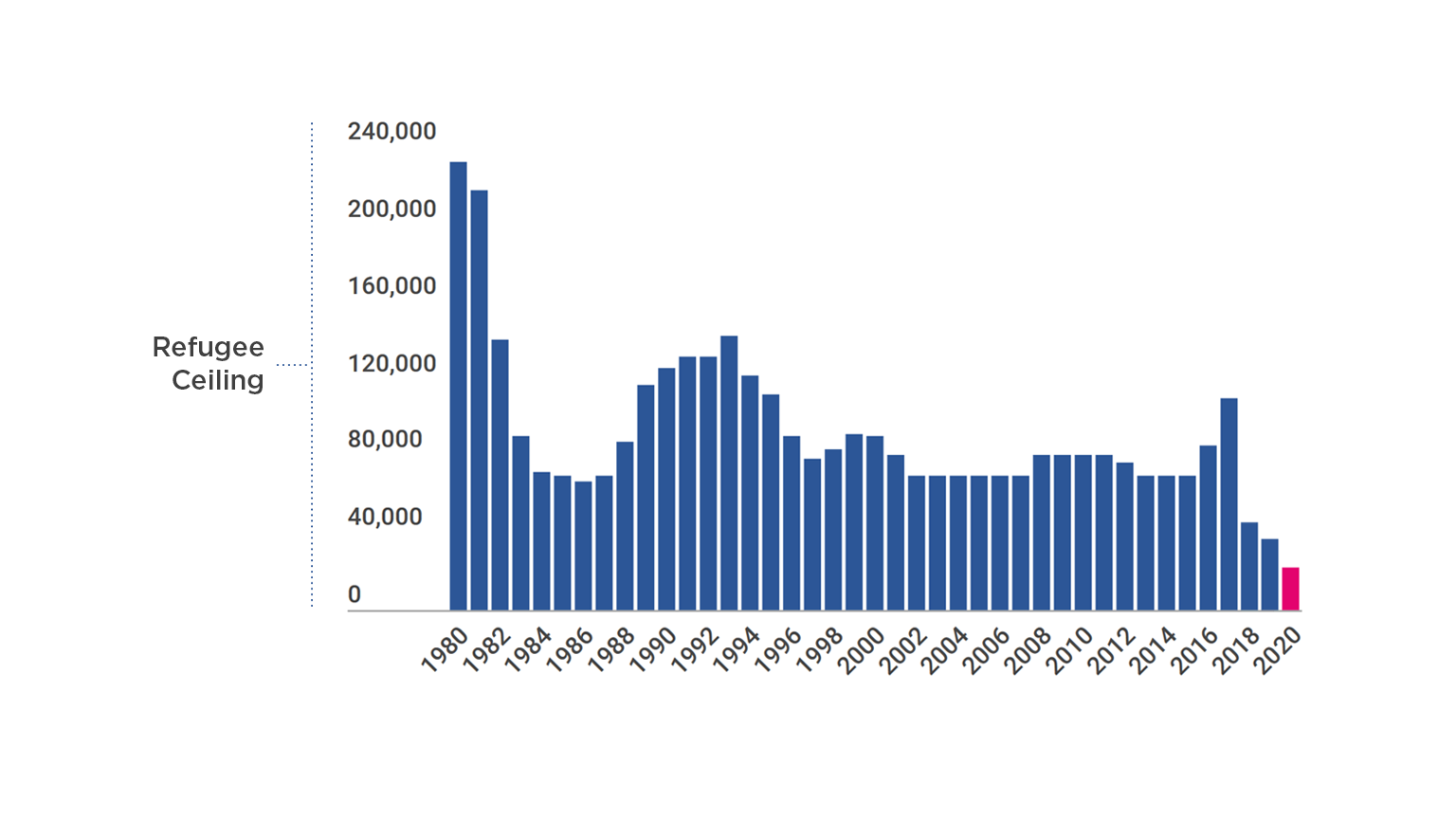 The process for the Presidential Determination was established nearly four decades ago when Congress passed the Refugee Act of 1980 with strong bipartisan support. The legislation, which codified America’s commitment to protecting refugees, states that the president must consult with Congress each year to determine the maximum number of refugees that can be resettled to the U.S. the following fiscal year (the consultations for fiscal year 2021 have not yet taken place).

Only a small percentage of the world’s refugees are candidates for resettlement. Those with specific safety, medical, or other concerns that cannot be addressed in the countries to which they have fled find resettlement to a third country their only option. The administration has claimed many times that allowing in refugees is dangerous, but refugees are among the most thoroughly vetted individuals allowed into the United States.

In the face of the refugee crisis, the PD represents the United States’ commitment and capacity to offer safe haven to refugees. Despite the administration’s increasingly restrictive refugee and asylum policies, HIAS is as dedicated as ever to helping refugees find welcome, safety, and freedom in the United States.

Sign HIAS’ petition to the administration urging them to set a Presidential Determination for 2021.

Lev Golinkin on "A Backpack, a Bear and Eight Crates of Vodka"

Guest Blog: What Visiting a Nepali Refugee Camp Taught Me