The United States has a long and proud tradition of welcoming refugees. Our country was founded as a safe haven for people escaping religious persecution, and time and time again, refugees have found freedom and prosperity in the U.S.

But sadly, with nearly 26 million refugees worldwide — the largest number in recorded history — the administration has lowered refugee admissions. In 2019 the admissions cap, officially known as the Presidential Determination, or “PD,” was set at 30,000, the lowest since the U.S. refugee resettlement program was created. Recently, reports surfaced that the United States is considering admitting zero refugees in 2020.

The process for the Presidential Determination was established nearly four decades ago when Congress passed the Refugee Act of 1980 with strong bipartisan support. The legislation, which codified America’s commitment to protecting refugees, states that the president annually must consult with Congress to determine the maximum number of refugees that can be resettled to the U.S. the following fiscal year. In the face of the refugee crisis, the PD directly represents the United States’ commitment and capacity to offer safe haven to refugees. 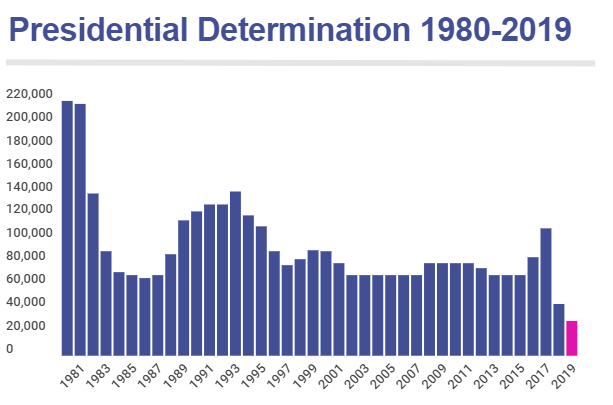 From 1980 through 2017, the average PD was 95,000, with an average number of yearly refugee arrivals of 85,000. In 2018 and 2019 the numbers dropped drastically; not resettling one single refugee in 2020 would be a shameful abdication of our nation’s historic leadership in this area.

Despite the administration’s increasingly restrictive refugee and asylum policies, HIAS is as dedicated as ever to helping refugees find welcome, safety, and freedom in the United States.

How HIAS Gets Vital Cash To Displaced Ukrainians